30th President of the United States

Under the Constitution of 1787 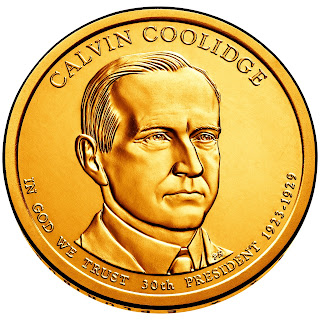 JOHN CALVIN COOLIDGE was born July 4, 1872 in Plymouth Notch, Vermont. He was the only son of John Calvin Coolidge, a jack-of-all-trades, teacher, storekeeper, farmer, politician, and even mechanic when necessary and Victoria Josephine Moor, a handsome woman who loved poetry and natural beauty, who died when Calvin was 12. The Coolidges lived in the rear of the combined general store and post office, and young Coolidge attended the local school. He was later enrolled in the Black River Academy in Ludlow, Vermont and in 1891, attended Amherst College in Amherst, Massachusetts, being the first of the Vermont Coolidges to attend college.

Students and Teachers of US History this is a video of Stanley and Christopher Klos presenting America's Four United Republics Curriculum at the University of Pennsylvania's Wharton School. The December 2015 video was an impromptu capture by a member of the audience of Penn students, professors and guests that numbered about 200. 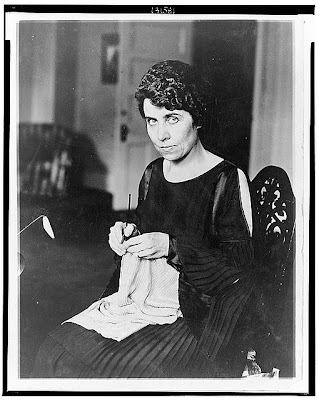 On October 4, 1905 Coolidge married Grace Anna Goodhue from Vermont, who taught at the Clarke Institute for the Deaf in Northampton. Vivacious, witty, and friendly, with a pleasant smile, she was the opposite of her quiet husband. They had two sons, John Coolidge (1906 - ) and Calvin Coolidge, Jr. (1908 – 1924).

His relationship with Hammond and Field led him into politics, which came easily to him because his father was a frequent officeholder in Vermont. In Northampton, Hammond and Field were political leaders and found Coolidge a willing political apprentice. In 1898 he was elected as a city councilman. From that day until his retirement from the presidency he was seldom out of public office. In 1905 he suffered his only election defeat, in a contest for school committeeman. In 1906 he was elected to the Massachusetts House of Representatives. During his two one-year terms in the state house, Coolidge made little impression. Coolidge was elected mayor of Northampton in 1909 and reelected in 1910. In 1911 he was sent to the state Senate, where he became a Republican leader. After his election to a third Senate term in 1913, Coolidge was elected to the powerful position as president of the state Senate. In 1915 he ran successfully for lieutenant governor. Coolidge used his three years as lieutenant governor to acquire more knowledge of government, and in 1918 he was elected governor of Massachusetts.

As governor, Coolidge became nationally known in 1919, when the Boston policemen went on strike. Coolidge, who had earlier refused to take action, brought in troops and asked for federal soldiers in case a general strike should occur. The policemen returned to work and when Coolidge was asked to let suspended policemen return to their jobs, Coolidge refused, saying, "There is no right to strike against the public safety by anybody, anywhere, anytime." His statement was applauded throughout the nation. At the Republican National Convention in 1920, he won the nomination for vice president, joining Warren G. Harding on the ticket. Harding and Coolidge received an overwhelming victory of 7 million votes. The vote in the Electoral College was 404 to James M. Cox’s 127.

Little was expected of the vice president, and Coolidge was not very active. He presided over the Senate, attended Cabinet meetings, and ranked next to the president in ceremonial affairs. "Silent Cal," as he was called, started to convey himself more in longer speeches and in newspaper articles, but he had little enthusiasm for his job and had developed no power as a national political figure. When Harding died suddenly in San Francisco, California, on August 2, 1923, Coolidge was visiting his father in Vermont. He received the news of the president's death in the early hours of August 3 and took the presidential oath in the farmhouse parlor by the light of kerosene lamps. Coolidge’s father, who was a justice of the peace, administered the oath of office. However, because his father could only swear in people for Vermont offices, Coolidge had to repeat the oath in Washington, D.C., 18 days later. 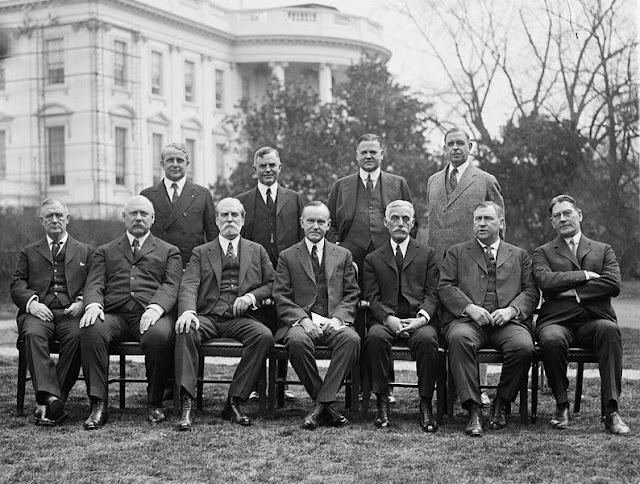 Coolidge’s reputation for honesty served him well when the Harding scandals came to light. He moved swiftly to restore confidence in the White House, and otherwise followed his conviction that “the business of America is business.”   Coolidge vetoed the McNary-Haugen farm-relief bill with the equalization fee, calling it an "economic folly." He advocated reducing surtaxes on the high income brackets, arguing that a  lower tax rate would produce more revenue for the federal coffers. His prohibition policy was to see that the federal government enforce the law as long as the 18th Amendment remained in the Constitution.

The country was enjoying high productivity and low unemployment and he was the apostle of prosperity, economy, and respectability during the 1924 presidential campaign. His opponents exhausted themselves with charges about the government's deficiencies, while he received credit for his equanimity and the economic upturn. With his slogan, “Keep cool with Coolidge”, he won easily, but 1924 was a sad year for Coolidge, for in July his younger son, Calvin, Jr., died of blood poisoning.

Coolidge, the dour and frugal teetotaler from Vermont was utterly out of step with the Jazz Age of his second term. As bootlegging, corruption and stock market speculating became rampant, Coolidge, who preferred to lead by example, tended to administrative affairs and quietly trimmed $2 billion from the national debt.   The New York Times in its article, Unusual Political Career of Calvin Coolidge, Never Defeated for an Office,  summarized his second term as follows:


During his term of office from 1925 to 1929 President Coolidge achieved more of his program. He was imperturbable under criticism of his administration, for he had usually foreseen the criticism and it was part of his calculations. He was somewhat disturbed, however, by the legend which had grown up about the silence--that he was a cold, inhuman political machine.

He attempted to be more friendly, but his attempts were awkward with all but his most intimate associates. His natural taciturnity, his distaste for emotionalism, the disciplined life he had led, and finally the dignity of his high office, all combined to keep him so apart from the rest of mankind that there was little outer manifestation of any inner stir.

He did not seek reelection in 1928. He retired in 1929 to Northampton, where he busied himself writing newspaper and magazine articles. After retirement from the Presidency hes served as the president of the American Antiquarian Society and was elected to directorship on the board of the New York Life Insurance Company. He also served as the the National Transportation Committee chairman, which was a group formed by numerous banks, insurance companies and other organizations interested in railway securities.  The purpose of the committee was to study the situation of the railroads and presenting for public approval recommendations to improve the railway system.

He seldom took an active role in politics but on Oct. 2, 1932, at a Madison Square Garden Republican campaign rally, he made his first public address in four years, when he appeared.  Coolidge  besmirched Governor Franklin D. Roosevelt and the Democratic party and pleaded for the re-election of President Herbert Hoover.

Coolidge's last speech was on the evening of Nov. 7, another appeal for the President's re-election, delivered in a radio broadcast from Northampton..  Mr. Coolidge's last message to the American people was broadcasted from Station WINS in New York on Jan. 1, in which he said:


"For the year 1933 it seems to me that we need cooperation and charity. The resources of our country are sufficient to meet our requirements if we use them to help each other. We should cooperate to promote all kinds of business activity. We should do what we can in the way of charity. If all that is implied in these two words could be put into operation, not only would our economic condition begin steadily to improve but our destitute would secure ample relief. I can think of no better resolution for the new year than to work in these directions."

His health declined rapidly, and on January 5, 1933, he died of coronary thrombosis.


The Congressional Evolution of the United States of America

Presidents of the United States of America

Capitals of the United Colonies and States of America

Book a primary source exhibit and a professional speaker for your next event by contacting Historic.us today. Our Clients include many Fortune 500 companies, associations, non-profits, colleges, universities, national conventions, PR and advertising agencies. As a leading national exhibitor of primary sources, many of our clients have benefited from our historic displays that are designed to entertain and educate your target audience. Contact us to learn how you can join our "roster" of satisfied clientele today!

Primary Source exhibits are available for display in your community. The costs range from $1,000 to $35,000 depending on length of time on loan and the rarity of artifacts chosen.

No Taxation Without Representation

US Bill of Rights

*** President of the Confederate States of America